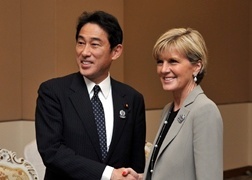 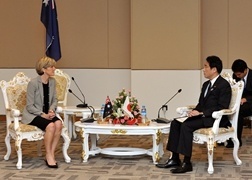 On August 9, commencing at 11:36 a.m. for approximately 35 minutes, Mr. Fumio Kishida, Minister for Foreign Affairs, who is visiting Myanmar to attend the ASEAN Foreign Ministers' Meeting, held a Japan-Australia Foreign Ministers' Meeting with the Hon. Julie Bishop, MP, Australian Minister for Foreign Affairs. The outline of the meeting is as follows.
1. Minister Kishida opened the meeting by expressing anew his condolences over the large number of Australian citizens who lost their lives in the downing of a Malaysia Airlines aircraft that occurred over Eastern Ukraine. Minister Kishida also noted that he would continue to provide support so that all parties concerned would cooperate with the international investigation to urgently probe into the facts, and that the armed groups would respond to a bidirectional ceasefire and peace talks. Minister Bishop expressed her deep gratitude in response, explaining the current situation regarding the investigation undertaken by the Government of Australia.
2. The Ministers exchanged views on recent Japan-Australia relations, affirming the grand success of the recent visit to Australia by Prime Minister Shinzo Abe. They confirmed that they would follow through the outcomes of the summit meeting in various areas like economic relations including early entry into force of the EPA,  security and defense relations as well as cooperation in the Pacific region.
3. Additionally, Minister Kishida underscored his emphasis on issuing a clear message on the rule of law at this ASEAN Foreign Ministers' Meeting, and expressed his wish to cooperate with Australia in this regard. Minister Kishida said North Korea's repeated ballistic missile launches in violation of the United Nations Security Council resolutions should be strongly condemned. Echoing Minister Kishida,, Minister Bishop told she would strongly urge North Korea's denuclearization, and would condemn its recent provocative actions at the Meeting.
4. The ministers also exchanged views on the importance of youth exchanges, and affirmed they would further promote student exchanges via the Australian Government's New Colombo Plan and Japanese Government's support programs for study abroad.