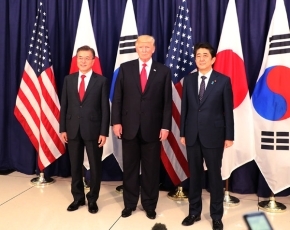 On July 6, commencing at 7:35 p.m. (local time) for approximately 75 minutes, Mr. Shinzo Abe, Prime Minister of Japan, on the occasion of his attendance at the G20 Hamburg Summit, held a Japan-U.S.-Republic of Korea (ROK) Trilateral Summit Meeting with the Honorable Donald Trump, President of the United States of America, and Mr. Moon Jae-in, President of the ROK, at the U.S. Consulate General Hamburg, the first Japan-U.S.-ROK Trilateral Summit Meeting to be held since the two presidents were inaugurated. The overview of the meeting is as follows. (The meeting was attended on the Japanese side by Mr. Kotaro Nogami, Deputy Chief Cabinet Secretary, and others; on the U.S. side by the Honorable Rex Tillerson, Secretary of State, and others; and on the ROK side by Dr. Kang Kyung-wha, Minister of Foreign Affairs, and others.)