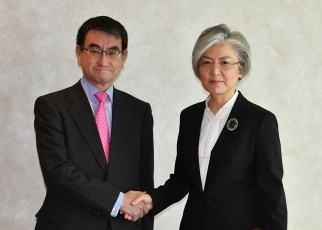 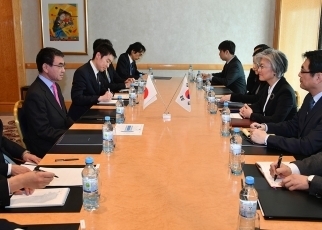 On February 15, commencing at 10:30 a.m. (local time) for approximately 50 minutes, Mr. Taro Kono, Minister for Foreign Affairs, who is visiting Munich, Federal Republic of Germany to attend the Munich Security Conference, held a Japan-Republic of Korea (ROK) Foreign Ministers’ Meeting with H.E. Dr. Kang Kyung-wha, Minister of Foreign Affairs of the ROK. The overview of the meeting is as follows.
1 With regard to the issue of former civilian workers from the Korean Peninsula, Minister Kono conveyed concerns over the movements taken by some plaintiffs to seize the assets of Japanese companies, and once again urged the ROK to take appropriate measures. Minister Kono also once again requested the ROK to respond to the diplomatic consultations based on the Agreement on the Settlement of Problems concerning Property and Claims and on Economic Co-operation between Japan and the ROK.
In addition, Minister Kono reiterated Japan’s position regarding the remarks made by Mr. Moon Hee-sang , Speaker of the National Assembly of the ROK and former Chair of the Korea-Japan Parliamentarians’ Union.
Minister Kono also communicated concerns over the 100th anniversary of the March First Independence Movement, in view of the severe circumstances concerning the Japan-ROK relationship.
2 Regarding the issue of North Korea, the two foreign ministers exchanged views on the status of the preparations for the second U.S.-North Korea Summit Meeting and on the views of Japan and the ROK, respectively. The two foreign ministers confirmed that Japan and the ROK, and Japan, the ROK and the United States will continue to work closely together to ensure that the U.S.-North Korea Summit Meeting is meaningful.
3 The two foreign ministers shared the view that it was important for their diplomatic authorities, including foreign ministers, to continue to engage in closer communication.