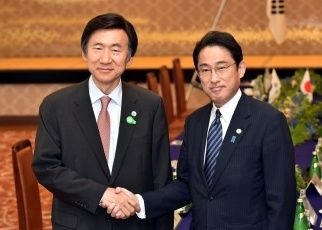 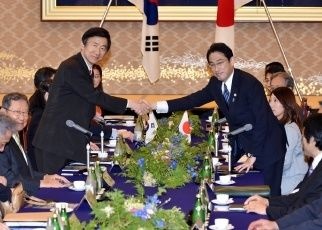 3. The two Foreign Ministers welcomed that various accredited events are being held in both Japan and the ROK to commemorate the 50th anniversary of the normalization of relations, and shared their view that they will continue to cooperate to make this year meaningful. As part of that, the Foreign Ministers welcomed the holding of celebratory events in the capitals of both countries on June 22 (confirmed the attendance of both Prime Minister Abe and President Park), and affirmed that they will proactively support the various events, including the Japan-ROK Festival.

5. Both Foreign Ministers confirmed that strengthening cooperation between Japan and the ROK is essential not just to Japan and the ROK, but to the peace and stability of the Asia-Pacific region,  and shared the view that they will continue to deepen practical cooperation in a variety of fields, including security and the economy. In connection with the MERS outbreak in the ROK, they shared the view that both sides will communicate closely in order to cooperate on the responses.

6. The Foreign Ministers also discussed outstanding issues of concern between Japan and the ROK, including tightened import restrictions on Japanese fishery products, the trial over the requisitioned civilians from the Korean Peninsula, the issue surrounding the indictment of the former Sankei Shimbun Seoul bureau chief, and the comfort women issue. Additionally, they fully shared the view that Japan and the ROK, as responsible members of the World Heritage Committee, will coordinate to make the Committee a success, and will cooperate so that the sites being recommended by their respective countries (the ''Sites of Japan Meiji Industrial Revolution'' and the ''Baekje Historic Areas'') are both listed.

7. The Foreign Ministers confirmed the importance of close cooperation between Japan and the ROK, and Japan-ROK-United States over the North Korean issues, in order to extract concrete action from North Korea on denuclearization, and they also confirmed understanding and cooperation on North Korea's humanitarian issues, including the abductions issue.