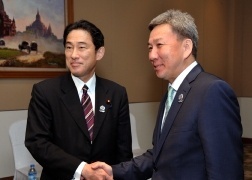 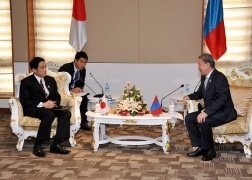 On August 10, commencing at shortly after 1:30 p.m. for approximately 25 minutes, Mr. Fumio Kishida, Minister for Foreign Affairs of Japan, who is visiting Nay Pyi Taw, Myanmar to attend the ASEAN-related Foreign Ministers' Meetings, held a Foreign Ministers' Meeting with H.E. Mr. Luvsanvandan Bold, Minister for Foreign Affairs of Mongolia. An outline of the meeting is as follows.
1. At the beginning, Minister Bold said Japan-Mongolia relations are entering an extremely positive era. He expressed gratitude for Japan's support of the recent visit to Japan by H.E. Mr. Tsakhia Elbegdorj, President of Mongolia, and for the Government of Japan's cooperation with the Mongolia-Japan Business Forum that was held at the same time, and stated his hope that bilateral relations will be elevated up to an even higher level as a result of an agreement in principle that was reached on the Japan-Mongolia Economic Partnership Agreement (EPA). Minister Bold said he once again wants to express thanks for Prime Minister Shinzo Abe's efforts and personal interest in Mongolia.
2. In response, Minister Kishida said that reaching an agreement in principle on the Japan-Mongolia EPA is a substantial development in bilateral relations, and that he hopes the EPA will become a foothold linking Mongolia to regional and global markets. In addition, he said Japan and Mongolia's cooperation on regional frameworks etc. is meaningful for regional peace and stability, and he hopes to further strengthen cooperation going forward.
3. In addition, the ministers also exchanged views on regional affairs and cooperation in the international arena. Within that, Minister Bold said he welcomes progress in dialogue between Japan and North Korea, and Minister Kishida responded by thanking Minister Bold for Mongolia's understanding and cooperation over the abductions issue.