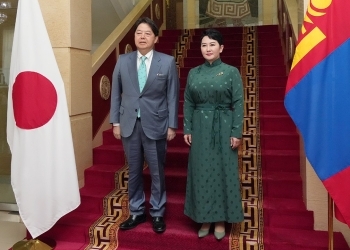 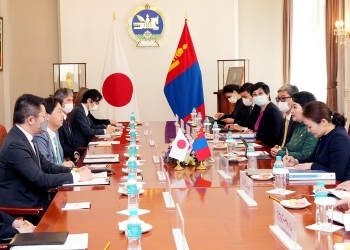 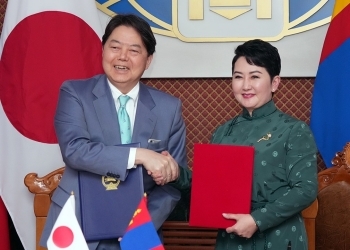 On May 1, commencing at 9:55 a.m. (local time; same day, 10:05 a.m. JST) for 1 hour and 30 minutes, Mr. HAYASHI Yoshimasa, Minister for Foreign Affairs of Japan, who is visiting Mongolia, held a Japan-Mongolia Foreign Ministers’ meeting with H.E. Ms. Batmunkh BATTSETSEG, Minister for Foreign Affairs of Mongolia, and exchanged notes concerning the grant aid “the Project for Human Resource Development Scholarship.” The overview of the events is as follows.

a. Minister Battsetseg welcomed Minister Hayashi’s visit on the occasion of the 50th anniversary of the establishment of the bilateral diplomatic relations, and stated that she wishes to further strengthen the “strategic partnership” with Japan and to continue to develop bilateral relations in various fields. She also reiterated her appreciation for Japan’s consistent support since the democratization of Mongolia in the early 1990s.

b. In response, Minister Hayashi extended his gratitude for the warm welcome and stated that he was pleased to meet Minister Battsetseg face-to-face for the first time (following the videoconference held last December), and that it is important to strengthen the "strategic partnership" between the two countries. He also stated that it is important for Japan and Mongolia, who share universal values, to strengthen coordination and cooperation across a wide range of areas at a time when the international order is being seriously challenged, as seen in the situation in Ukraine. He also stated that he would like to make this year - marking the 50th anniversary of the establishment of the diplomatic relations - a year to look back on the past 50 years and build the foundation and bonds for the next 50 years, on which both sides had shared the view in their video conference last December.

a. The two ministers reaffirmed their intention on the occasion of the 50th anniversary of the establishment of diplomatic relations between Japan and Mongolia to further strengthen and expand the "strategic partnership" between the two countries, and shared the view to cooperate in exchange activities at various levels and business in a wide range of areas. Also, Minister Battsetseg reiterated her gratitude towards Japan’s support in response to the spread of COVID-19, for it had a huge positive impact.

c. Minister Hayashi introduced various initiatives including youth exchange programs such as JENESYS and Japan-Mongol Student Forum that are planned on the occasion of this year’s "Year for the Promotion of Youth Exchange." Minister Battsetseg responded that she would like to focus on expanding this youth exchange.

d. The two ministers shared the view to deepen discussions even further on strengthening relations in the economic field. Minister Hayashi asked for continued consideration and support to ensure the smooth operation and management of Chinggis Khaan International Airport, a new symbolic project of cooperation between the two countries. He also called for further efforts to improve the investment environment for Japanese companies in Mongolia.

e. Minister Battsetseg announced that Mongolia would be participating in the Expo 2025 Osaka, Kansai, Japan.

(3) Cooperation in regional and international arenas

a. The two ministers also exchanged views on common challenges in the regional and international community and concurred on continuing to advance cooperation.

b. Minister Battsetseg gave an explanation based on Mongolia's position on the situation in Ukraine. In response, Minister Hayashi pointed out that Russia's aggression against Ukraine constitutes a violation of international law prohibiting the use of force and is a serious situation that shakes the very foundations of the entire international community, including Asia, and stated that the solidarity of the international community is strongly required.

c. The two ministers also exchanged views on regional and international situations, including the response to North Korea. They affirmed that they would continue coordination in responding to North Korea, including nuclear and missile issue, and the abductions issue.

2. Signing Ceremony of the Exchange of Notes on the Grant Aid “the Project for Human Resource Development Scholarship”

Following the Japan-Mongolia Foreign Ministers' meeting, the two ministers signed the exchange of notes concerning "the Project for Human Resource Development Scholarship," a grant aid of 260 million yen, for the purpose of supporting the study abroad at Japanese graduate schools for Mongolians including young administrative officials.