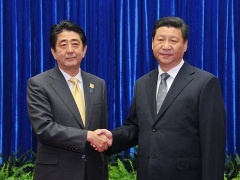 (3) Since being appointed, President Xi has been boldly engaging in domestic economic reforms and other initiatives, and is exercising powerful leadership. I am striving to restore vitality to Japan’s economy and society.

(5) Japan will continue to adhere to the course that it has taken to date as a peace-loving nation, and further contribute to peace and stability in the world, as a 'Proactive Contributor to Peace' based on the principle of international cooperation.

(6) My views on Japan-China relations are completely unchanged from the time when I visited China in October 2006. Based on the four items of common ground that were announced recently, now is the very time when we should return to the starting point and rebuild the concept of the “Mutually Beneficial Relationship based on Common Strategic Interests”.

(7) Japan and China are neighboring countries that face individual problems, but we should prevent those problems from damaging the overall relationship. Japan’s specific concerns have already been conveyed at the Foreign Ministers’ Meeting. I by all means hope you will respond positively.

(8) Together with President Xi, I would like to seek a right approach to Japan-China relations in the 21st century from a comprehensive and long-term perspective. I believe it is important to cooperate mutually at various levels on four points: (ⅰ) Promoting mutual understanding between citizens; (ⅱ) Further deepening economic relations; (ⅲ) Cooperation in the East China Sea; and (ⅳ) Stabilizing security environment in East Asia.

(9) In particular, by promoting dialogue and cooperation in the field of security, including an early implementation of a maritime communication mechanism between the defense authorities of the two countries, I would like to remove the potential for mutual distrust, and together contribute to the peace and stability in the region and international community.

(10) Last month I appreciated the Chinese ballet performance “Toki (Crested Ibis).” Such a cultural exchanges is important and I would like to promote them further.

In addition, Prime Minister Abe said that Japan and China should cooperate in dealing with mutual challenges facing the region and international community, and very briefly touched on the North Korea situation and measures to counter the Ebola virus disease.

3. In response, President Xi’s main statements are as follows:

(1) Based on the four basic documents between Japan and China and the recent four items of common ground, I would like to develop Japan-China relations in line with the concept of “Mutually Beneficial Relationship based on Common Strategic Interests”.

(2) I attach importance to the statement from the Japanese side that China’s peaceful development is an opportunity. I hope that Japan will squarely face the history issue and continue to follow the path of a peaceful nation.

(3) This meeting is a step forward to improve bilateral relations. From now on I would like to steadily move ahead with improving relations at various levels. In addition, I would like to advance cooperation in APEC.

(4) An agreement has already been reached on a maritime crisis management mechanism, and I would like to see continued communication at the working level.