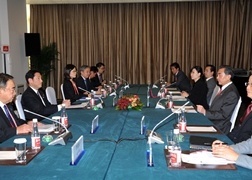 On Saturday, November 8, commencing at shortly after 2:00 p.m. (3:00 p.m. Japan time) for over 50 minutes, Mr. Fumio Kishida, Minister for Foreign Affairs, who is visiting Beijing, China, to attend the APEC Ministerial Meeting, held a Japan-China Foreign Ministers' Meeting with Mr. Wang Yi, Foreign Minister of the People's Republic of China. The outline of the meeting is as follows. (Japanese officials in attendance included Mr. Masato Kitera, Ambassador of Japan to China and Mr. Junichi Ihara, Director-General of the Asian and Oceanian Affairs Bureau, and  Chinese officials in attendance included Mr. Cheng Yonghua, Ambassador of China to Japan, and Mr. Xiong Bo, Deputy Director-General, Department of Asian of Ministry of Foreign Affairs of China).

(1) At the beginning, Minister Wang expressed his welcome for Minister Kishida, and mentioned four items that were announced on the previous day, November 7.
(2) Minister Kishida said that an undertone of improvement is currently occurring in Japan-China relations, and he wants to make that undertone larger and more certain through this Meeting. He said that  common ground expressed in the four items that was confirmed through discussions between the countries' foreign-affairs authorities will provide an important "chance" to get the Mutually Beneficial Relationship based on Common Strategic Interests between Japan and China back on track, but this is by no means the "goal." Minister Kishida also stated that the momentum for improving relations should be strengthened, and in order to accelerate this, a Japan-China Summit Meeting should be held.
(3) In response, Minister Wang said that the circumstances that Japan and China face are difficult, and a process is needed to improve relations. He said that the principled agreement announced on November 7 takes the first step toward improving Japan-China relations, however, in order to fundamentally improve the problem, the Chinese side pay close attention to the following three points: i) Perception of history by the Japanese side; ii)  Japan's appreciation of China's development; and iii) Whether Japan will continue to follow the path of a peaceful nation.
(4) In response, Minister Kishida stated that the Government of Japan's official positions regarding the various points mentioned by Minister Wang have been repeatedly clarified in Cabinet decisions etc. and he will not explain them in detail at this Meeting. Minister Kishida said that difficult issues exist between Japan and China, and that all of them will not be resolved as a result of one thing. Based on that, Japan will make an effort so that the November 7 announcement will lead to concrete results, and the Chinese side must also make an effort. Minister Kishida pointed out that, in any event, it is important that the current momentum is maintained and expanded, and in that regard as well, dialogue between the two countries' leaders is important. Minister Kishida also stated that, as Foreign Minister, he intends to strive to improve relations, and hopes Minister Wang will make similar efforts.
(5) Additionally, Minister Wang said that Japan and China are neighbors that are unable to relocate and so must live together peacefully in the long term, and that he intends to make proactive moves constantly and cumulatively.

(1) Minister Kishida said the following:
i) (In addition to holding a Japan-China Summit Meeting), cooperation at the foreign-minister level is also important, and he wants to propose: (a)Resuming mutual visits by foreign ministers; (b) Holding frequent meetings at multilateral occasions; and (c) Aiming to hold a Japan-China-Republic of Korea Trilateral Foreign Ministers' Meeting at an early date.
ii) Additionally, the Japanese side has decided to ease the requirements of issuing multiple entry visas for Chinese individuals visiting Japan for business purposes, cultural and intellectual figures, and individual tourists.
iii) Furthermore, in order to make the improvement in Japan-China relations definite, it will be particularly important to promptly resume: (a) Japan-China High-Level Economic Dialogue; (b) Japan-China Foreign Vice-Minister's Strategic Dialogue; (c) Japan-China Security Dialogue; and (d) Japan-China Comprehensive Energy Conservation and Environment Forum. It will also be important to steadily promote the confidence building in the maritime field.
(2) In response, Minister Wang said that he recognizes the series of proposals made by Minister Kishida on resuming the various dialogues as a positive suggestion, and believes that, once relations between the two countries are back on track, it will be possible to restart all of these dialogues. To this end as well, it is important for both Japan and China to share views of the four items.

(1) Minister Kishida said that the illegal operation of large numbers of Chinese coral vessels in the seas close to Japan, including around the Ogasawara Islands, is extremely regrettable. He stated that, while he is aware that the Chinese side is also in the process of responding earnestly, it will be important to enhance the effectiveness of controls in China, and that he wants to strengthen cooperation between the relevant authorities.
(2) Minister Wang said that the Chinese side is also taking the necessary measures.