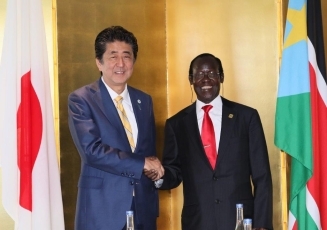 On August 29, for about 15 minutes, from 10:50 am, Prime Minister Shinzo Abe received a courtesy call from H.E. Mr. James Wani Igga, Vice-President of the Republic of South Sudan, in Yokohama, Japan. The overview of the courtesy call is as follows. Vice-President James Wani Igga is visiting Japan to participate in the Seventh Tokyo International Conference on African Development (TICAD7) held from August 28 to 30.