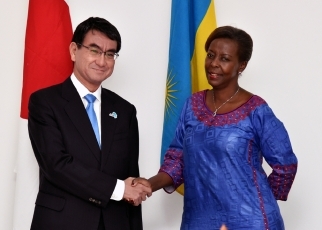 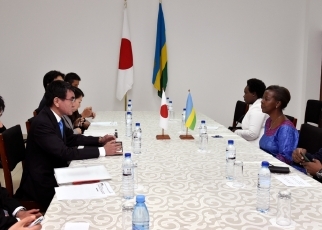 On August 25, commencing at 11:05 a.m. for approximately 30 minutes, Mr. Taro Kono, Minister for Foreign Affairs of Japan, who is visiting Maputo (the Republic of Mozambique) to attend the Tokyo International Conference on African Development (TICAD) Ministerial Meeting, met with Mrs. Louise Mushikiwabo, Minister of Foreign Affairs and Cooperation of the Republic of Rwanda. The overview of the meeting is as follows.

1. At the outset, Minister Kono welcomed Minister Mushikiwabo’s attendance at the TICAD Ministerial Meeting, and offered his congratulations on the reelection of H.E. Mr. Paul Kagame, President of Rwanda, in Rwanda’s presidential election on August 4. He also said that he would continue to cooperate with the African Union (AU), which President Kagame will chair next year. In addition, Minister Kono mentioned his intention to further strengthen the bilateral relationship by encouraging Japanese companies to set up businesses and by proactively supporting areas such as the development of industrial human resources in Rwanda which is achieving rapid economic growth in recent years.

2. In response, Minister Mushikiwabo expressed her high appreciation for the expansion of Japanese companies in the area of info-communications in Rwanda in recent years, and for the contributions Japan is making to human resources development through the ABE Initiative. Minister Mushikiwabo explained that Japan is an extremely important partner for Rwanda.

3. The two foreign ministers further discussed the situation in the Republic of South Sudan, and shared recognition that it is important for Japan and Rwanda as well as the regional organizations concerned and the United Nations (UN), to cooperate in order to improve South Sudan’s situation.

4. In addition to this, Minister Kono and Minister Mushikiwabo exchanged views on cooperating in the international arena, including UN Security Council reform and the situation in North Korea.