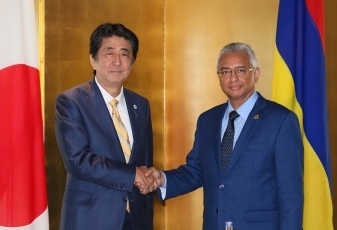 On August 29, for approximately 15 minutes, from 5:15 p.m., Prime Minister Shinzo Abe held a Summit Meeting with the Honorable Pravind Kumar Jugnauth, Prime Minister of the Republic of Mauritius, in Yokohama, Japan. The overview of the meeting is as follows. Prime Minister Jugnauth is visiting Japan to participate in the Seventh Tokyo International Conference on African Development (TICAD7) held from August 28 to 30.

Page Top
Back to Japan-Mauritius Relations