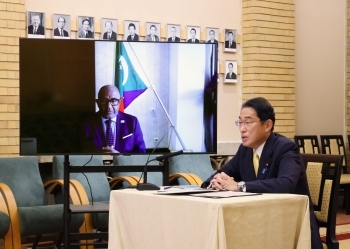 On August 26 commencing at 6:20 p.m. for approximately 30 minutes, Mr. KISHIDA Fumio, Prime Minister of Japan held a summit video teleconference meeting with H.E. Mr. AZALI Assoumani, President of the Union of the Comoros, who is visiting Tunisia to attend the 8th Tokyo International Conference on African Development (TICAD 8). The overview of the meeting is as follows.

Page Top
Back to Japan-Comoros Relations